ANDY PHILLIPS and THE CADILLAC WALK

Sundays long awaited guest on the Live Sunday Sessions is rising star Andy Phillips and his band The Cadillac Walk. After taking some time to sort out the exact line up of musicians he wanted, over the last 12 months you only needed to spin around once and you would have bumped into the Peninsula guitarist as he has been as busy as 10 men, gigging like crazy and playing shows all over the place, fortunately, many of them in the southern suburbs and on the peninsula. The largely self taught guitar maniac is getting set for a debut release later in 2014 but in the meantime get aboard the Southern FM blues express as Andy and crew take us on a ripping one hour ride of his take on the Texas blues this Sunday afternoon from 4pm.

Recent article on Andy in that erudite and august journal Pearl Magazine here:- 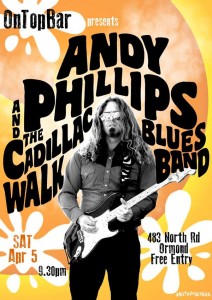 tagged with and phillips and the cadillac walk, andy phillips, Live Sunday Sessions