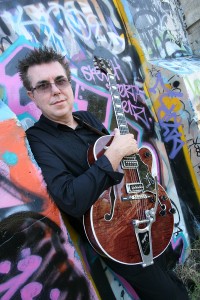 Born in Wellington, New Zealand and the youngest of six, Kirk was introduced to music at a very early age thanks to encouraging parents. He started learning guitar at eight years old and by age ten was playing pubs, talent quests and local venues.
He describes School as “…..a challenge, shall we say, and music was a fantastic release and means of escape.”
“I’d done a couple of Kids TV shows and had a band by the time I was twelve. By sixteen I was out of school, working as a hairdresser by day and playing music at night”. He toured New Zealand in his teens and by his early twenties was playing five nights a week (sometimes 2 gigs a night). “There’s nothing better for learning your craft than playing constantly”.
He’d flirted with writing songs in his teens but It wasn’t until he moved to Australia in the mid 80’s that he really started to take writing seriously. ”I’d teamed up with fellow Kiwis ‘Back Door Blues Band’, playing guitar. It was a scream of a band, featuring notorious new Zealand front man Ted Clark”. He remembers It as a very productive period for him writing-wise in that he learned a great deal about song writing & arranging.
Kirk settled into Melbourne life through the 90’s featuring in several excellent line ups around town and releasing his first CD – a self titled EP. He describes it as “..very heavily country influenced, with a ‘yee ha’ version of Ringo Starr’s ‘Photograph’ as well as 5 original tracks”. One of these, ‘Hard times in wonderland’ enjoyed success when recorded by country artist Rene Diaz. “It was a great learning period for me-this time learning the business of music, without a doubt the biggest challenge to any musician”.
Several projects followed: a return to NZ, a brief sojourn to the UK & Europe and numerous tour destinations around Victoria, New South Wales & Queensland.

The brand new album, ‘Goodnight Ruby’ was recorded from April 2007 with producer Philip Riley while back ‘full circle’ in his old home town of Wellington-“…..the logical place to re-invent myself and start a new adventure”.