Introducing King Catfish! Like your blues down and dirty? Do you believe that Muddy Waters invented electricity?

King Catfish are a CHICAGO & DELTA BLUES outfit based on the Mornington Peninsula. Playing songs from artists such as Muddy Waters (remember – the guy who invented electricity), Howlin’ Wolf, Sonny Boy Williamson and Robert Johnson and the odd sneaky musical departure to some old favorites by bands like The Captain Matchbox Whoopee Band. Founded in December 2011, The King Catfish Blues Band has fast gained popularity, entertaining at local venues, corporate functions and events. They are busier than ever right now but have deigned to bring their sounds to 88.3. So , this Sunday afternoon from 4pm get set for some ramblin boogeying oldtime blues bought to life by The King…..The King Catfish!! 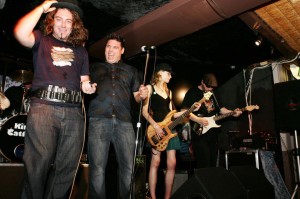