Exclusive interview with Axel Korinth, co-author of the book ‘A Is For Apple. Vol. 2’ with Purple Haze presenter Mark Copolov – interview and music [podcast, 2 hours, July 2017]

Axel Korinth, co-author of the book ‘A Is For Apple’, an amazing 725 page coffee table book, which is an illustrated history of the Beatles’ multimedia corporation during January to March 1969.

Some of the topics (including music) they discuss are :

“A splendid time is guaranteed for all”!

About the co-author Axel Korinth :

Here is a press release about this amazing book: 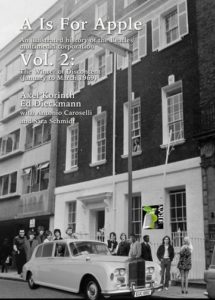 “A useful guidebook for the small group of aficionados that appreciate the finer details of this endlessly fascinating chapter in Fab Four history.” (Flashback)

“A Is For Apple is an impressive accomplishment and an essential reference book for anyone with an obsession for all things Beatles.” (The 910)

“I can’t believe how much material is here! Hopefully, I can consume this entire Apple by the time the next volume falls from the tree.” (Beatlefan)

And those were only some of the praises bestowed on Volume 1 of a is for apple, the first in a series of what originally was envisaged to become a three-part, then a four-part series of books on the Beatles’ ill-fated business empire. But the amount of investigation, documents, interviews and scans of rare records and other memorabilia has literally created a monster of ever-increasing proportions. What to do with all the information and visuals that we amassed in the almost two years after Volume 1 was published? To be honest, we initially envisaged Volume 2 to cover all of 1969 and even perhaps 1970. It was pretty early on during the preparations for this book that we realized this would not work out. And rather than offering a condensed and perhaps watered-down version of all the material we found, we have decided to publish it all, no holds barred, no prisoners taken. We feel we have only one shot at doing this and we want to do this right, and we want to do it right now! In the first three months of 1969 so much was going on Apple-wise, some known, some not so well-known and some totally unknown, that the amount of information in Volume 2 of a is for apple is guaranteed to knock you off your feet, even if it only covers what seems like a short time.

“If Apple goes on losing money at this rate, we’ll all be broke in six months,“ said John Lennon in early 1969. The winter of 1969 for the Beatles and Apple was, as George Harrison put it so aptly, a Winter of Discontent. The long sessions at Twickenham and later at Apple took their toll on the Beatles who were already slightly burned out from the White Album sessions the previous year. While Paul was the one to try and get something, anything, together for the Beatles, the other three were not so gung-ho anymore to go along with the Paul-instigated Beatles projects. George had just spent nearly a month in the USA, jamming with various musicians and having a great time, John was immersed in Yoko and a dependence on stuff somewhat stronger than a reefer and Ringo seemed to be more interested in his upcoming role in The Magic Christian movie.

Volume 2 of a is for apple covers the Get Back sessions and Mary and Jackie’s albums in great detail. The Yellow Submarine album takes up more than 60 pages by itself. Volume 2 covers the period of January to March 1969. And while everyone will be familiar with these releases, maybe not in such great detail, Volume 2 also offers information on lesser known Apple acts from this epoch, such as John Surman, Mike Westbrook, Mike Cooper, the Misunderstood, Flamma Sherman, Stefan Grossman, Peter Cooper, Slow Dog and John Fitch.

Volume 2 has a chapter on Timothy Travel, a puppet series produced by Apple, which didn’t progress beyond a pilot episode and is more or less totally forgotten. Allen Klein’s reign is just around the corner and John and Yoko are busy making their Rape movie. (White) Trash issue their superb Road To Nowhere single and Brute Force’s King of Fuh is being picked up by George Harrison. Two Virgins gets its USA release and a four album pack of Beatles hits gets nixed before release. Bubble Puppy, Mary Jane Bann’d and Stone Down are all nearly signed by Apple while The Iveys go on national TV. John and Yoko stage their first Bed-In in Amsterdam and Paul records with The Fourmost. The amount of day-to-day activities related to Apple in these three months is astounding. All this is covered in great detail in Volume 2 of a is for apple.

Slow Dog were a band that won a talent contest organized by Apple in Cambridgeshire and were destined to be signed by Apple. Why this didn’t work out in the end is all revealed in a is for appleVolume 2. Four of the band’s recordings made around the time of the contest will be included on an EP exclusively available with this book, kindly donated to us by Dave Kelly from Slow Dog and it marks the first time these recordings have ever seen an official release!

While we (Axel and Ed) are the main writers of the a is for apple series, for Volume 2 we have been privileged to have the ongoing support and help by our dear friend and top collector Antonio Caroselli, who has contributed a great number of rarities from his own collection to be used in Volume 2, while also contributing a substantial part of the text; and that of Sara Schmidt from the superb Meet The Beatles For Real blog, who has written a superbly interesting piece on the Apple Scruffs.

Volume 1 ofa is for applewas released in April 2015 to worldwide acclaim; all copies of the book sold out within a month and are now sought-after collector’s items which fetch high prices on the second-hand market. Ever since, people have been asking for a reprint of Volume 1. Well, we are glad to announce we will be offering a very limited number of reprints of this book, so if you missed out on Volume 1, this is your chance to grab a copy. Originally, Volume 1 came with a two-sided disc with two previously unheard Jackie Lomax demos, but due to agreements we had with Jackie, a reprint of that single is no longer an option. Instead, we are proud to be able to offer two previously unreleased Apple recordings on a vinyl single with the reprint, one of which is an Apple published song by Miles and Robert Priestley (who are also featured on one of RPM’s great Apple published acts compilations, 94 Baker Street Revisited), while the B-side is a version of Ev’rything’s Al’right by the Mojos performed by an unknown group and found on an Apple acetate. Of course we will give the buyers of the original Volume 1 the opportunity to buy this single as well.

We are also offering special packages at special prices, so you can save on postage for combined shipping and get the chance to purchase the last remaining copies of the book Who’s The Redhead On The Roof by Beatles roadie Kevin Harrington (signed by him) and/or the charity single Lu La Le Lu by Klaus Voormann and Wishful Thinking.