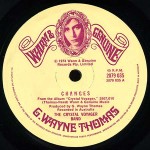 The ‘Warm & Genuine‘ G Wayne Thomas is truly a renaissance man of the Australian music industry. He has sung, produced, ran a record company & even invented a GPS system! However G Wayne Thomas is perhaps best known for producing Australia’s first movie soundtrack album to go Gold & even sang four of the tracks off that soundtrack including the Number 1 smash “Open Up Your Heart“. That soundtrack was the legendary “Morning of the Earth”.

Join G Wayne Thomas as he discusses his adventures with Bryce Courtney, the sons of Dylan Thomas, Tony Hancock, the advertising world, the movie world & of course, the music world on this Purple Haze Archive podcast.