Film review: DAWN OF THE PLANET OF THE APES, from Built For Speed 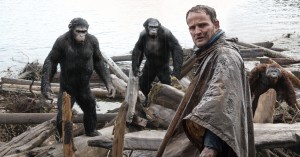 Rise of The Planet of The Apes from 2011 achieved the rare feat of rebooting a franchise in a fresh, intelligent and exciting fashion.  Essentially a remake of the fourth film in the original series, Conquest of the Planet of the Apes, the thoughtful, inventive and moving Rise revealed how lab apes, exposed to an experimental Alzheimer’s treatment, developed higher intelligence and an enhanced sense of self which compelled them to unite and escape captivity. It stands as one of the best science fiction films of recent years not least because it believably showed apes talking and made James Franco look credible as a scientist.

The sequel, Dawn of the Planet of the Apes reworks the original series’ fifth film Battle for the Planet of the Apes although it owes more than a passing nod to the story of Robin Hood.  Here, the apes, led by the highly intelligent chimpanzee Caesar (Andy Serkis), have established a ramshackle settlement in California’s Muir Woods.  They’ve largely forgotten about humans who, as a grim prologue informs us, have been decimated by a deadly virus and left to shelter without power in the crumbling remnants of cities like San Francisco.   An unexpected encounter between the apes and a group of humans, led by the benevolent Malcolm (Aussie Jason Clarke), who have ventured into the forest to try to resurrect a hydroelectric power station, ends peacefully but fear-mongers on both sides push human and ape into violent conflict.

This film has received many glowing reviews with some even suggesting it is far superior to Rise.  While impressive on a number of levels Dawn is not as compelling as its predecessor.  The rather thinly plotted Dawn is, like its progenitor Battle, really just a straightforward war film.  There’s none of the scientific intrigue of Rise which explored the impact of medical experimentation and hyper-speed evolution.  The internal politicking between Caesar and his vicious rival the frightening looking chimp Koba (voiced by Toby Kebbell) is cleverly handled but audiences witnessed an equally interesting depiction of ape rivalry and social rituals during what amounted to prison scenes in Rise.

Dawn is, however, a technical triumph.  Andy Serkis’ depiction of Caesar through motion capture is astonishingly realistic and he gives the ape leader remarkable character depth and pathos.  The computerised creations of Koba, as well as Caesar’s impressionable son Blue Eyes and the enormous, imposing but gentle Orang-utan Maurice (named in honour of Maurice Evans who played Dr Zaius in the original 1968 film) are also terrific.

Dawn also contains some dazzling set piece battles as mounted ape armies charge into San Francisco; there’s nothing quite like the sight of a crazed chimp on horseback blazing away with machine guns in each hand.  Earlier scenes of apes hunting elk or swinging through the forest in vast numbers are equally impressive.  Director, Matt Reeves also makes wonderful use of 3D immersing us in the apes’ damp leafy forest home and the dilapidated post-apocalyptic San Francisco.

Reeves overcooks some of the action sequences, though, with a gravity-defying battle between Caesar and Koba amid the skeletal scaffolding of an office tower looking like something out of a video game.  Also, while the CGI is generally realistic it occasionally looks cartoonish and there are scenes where apes move oddly and seem to float in space.

While the characters of Caesar and Koba are rendered with impressive detail and nuance, the human characters are thinly written and not particularly interesting.  As Malcolm, Jason Clarke never has the chance to be much more than a decent, sympathetic go-between while the characters of his wife (Keri Russell) and son (Kodi Smit-McPhee) are so underwritten that they have virtually no impact on the story.  Even Gary Oldman, who, as a gun happy military officer, is effectively Koba’s human equivalent, has only a perfunctory role.

Dawn of the Planet of the Apes is undoubtedly a well-made film and should satiate the needs of those looking for cutting-edge cgi and dynamic action but in the wake of its highly impressive and thought-provoking predecessor, it feels insubstantial.

tagged with Andy Serkis, Built for Speed, Dawn of the Planet of the Apes, Film review, Jason Clarke, Matt Reeves