Film review: EXODUS: GODS AND KINGS, from Built For Speed 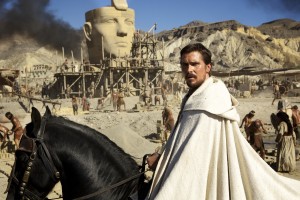 Exodus: Gods and Kings sounds disturbingly like the title of a violent video game and some people may feel this is what they have experienced after seeing Ridley Scott’s cgi-heavy take on the story of Moses. The obvious point of comparison for this film is Cecil De Mille’s 1956 biblical epic The Ten Commandments and like that film Exodus: Gods and Kings is long, overblown, often silly but occasionally thrilling.

Among a dubiously star-studded cast, Christian Bale plays Moses the unknowing child of a Hebrew slave raised as a prince in ancient Egypt. When his adoptive brother Pharaoh-in-waiting Ramses (Joel Edgerton) learns of Moses’ origins, Moses is exiled to the desert where he embraces the Hebrew faith and identity.  He also begins to have visions of God (bizarrely represented by a sullen English tween) who instructs him to lead the Hebrew people in revolution against the Egyptians.  While The 10 Commandments might have provided this film’s template, Exodus bares more than a passing resemblance to many of Ridley Scott’s previous works, particularly Gladiator.  Like Russell Crowe’s Maximus in Gladiator, Moses is depicted here a sword wielding warrior who, after being betrayed by a young, brutal and crazed ruler, re-emerges as a leader of the oppressed masses.

The film partially succeeds as a story of seething sibling rivalry with Ramses bitterly resenting the contempt shown toward him and the apparent favouritism shown toward Moses by his Father Seti (John Tuturro).  Joel Edgerton is suitably vain and volatile if a little showy as Ramses.  Unfortunately, he has one of those unusual movie accents that shifts from British to American to Australian to Spanish.  Bale brings his usual brooding intensity to the role of Moses but his performance lacks subtlety and nuance.  Also, he has little of the towering charisma Charlton Heston displayed as Moses 58 years ago although Bale’s facial hair looks more realistic.  Other casting choices verge on laughable with Tuturro noticeably out of place as Pharaoh, Sigourney Weaver wasted as Rameses’ Mother Queen Tuya, Ben Kingsley given little to do as Hebrew elder Nun and Ben Mendelsohn strangely reminiscent of Michael Palin’s Pontius Pilate from Life Of Brian as the campy Egyptian Vice Roy Hegep.

Biblical epics are largely about spectacle and this film contains some impressive sweeping depictions of the ancient Egyptian city of Memphis, clashing armies and the mass migration of the Hebrews to Canaan. There are also some stunning set pieces as the infamous plagues of frogs, storms and rivers of blood beset Egypt.  Of course, there’s the show stopper, the Hebrews crossing the Red Sea.  Interestingly, the film downplays the supernatural and suggests possible earthly origins for these events.

Scott maintains tension throughout the film so despite its 142 minute length Exodus: Gods and Kings is rarely dull.  Still, its hokiness, lack of emotional depth and dubious casting choices make this film nothing more than a moderate entertainment rather than a biblical film classic.