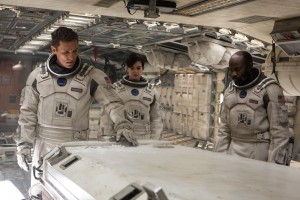 Along with David Fincher, Chris Nolan (The Dark Knight Trilogy, Memento, Inception) has been the most exciting Hollywood filmmaker of the last decade.  James Cameron may have made a bundle with Avatar but Fincher and Nolan have given us something darker, more cerebral and ultimately more satisfying.  Consequently, Chris Nolan’s latest film, space epic Interstellar, has been the subject of drooling anticipation.  The film has been shrouded in almost as much mystery as the Manhattan Project although rumours of a mind-blowing epic sci-fi adventure have been strategically leaked to produce wide-eyed expectations of a modern 2001: A Space Odyssey. Perhaps it’s the inevitable result of a film not living up to extremely high expectations but Interstellar is, despite some astonishing moments, a minor disappointment.

With a story that traverses time and space, plunges into black holes and touches on Holy Grail physics problems like the disunity between general relativity and quantum mechanics and the idea that three-dimensional reality is a hologram projected from the universe’s two-dimensional boundary, this film should have been an exhilarating intellectual workout and a mind blowing space adventure.  Somehow Nolan’s vison has, like Icarus, fallen victim to misguided ambition leaving us with a film that is strangely hurried yet slow-moving and schmaltzy yet emotionally cold.

The film is set in the near-future where various calamities have seen society to regress to the point where cities have become farming communities like one big Kansas.  Initially, this looks like a rural utopia but crop blight is turning farmland into depression-era dust bowls and threatening to destroy Earth’s food and oxygen supplies.  Humanity’s only hope resides in a secret mission to send a team of astronauts through a worm hole into a distant galaxy to investigate planets that might provide a new home for Earths inhabitants.  The man chosen to lead this mission is, somewhat unbelievably, former engineer and NASA test pilot turned farmer Joseph Cooper (Matthew McConaughey), yes he’s a JC.   The science fiction adventure component of this film is paralleled with Cooper’s family drama in which the salt-of-the-earth American dad agonises over leaving his 10-year-old daughter Murphy (Mackenzie Foy) and to a lesser extent his teenage son Tom (Timothee Chalemet) back on Earth.  His dilemma is exacerbated by the fact that, travelling near the speed of light, he will age much more slowly than his children so that he may miss much of their lives or even find them gone when he returns. That’s merely a thumbnail sketch of a story that stretches across decades and light years and explores the supernatural and the fabric of the cosmos.

So what’s wrong with Interstellar?  First of all it’s derivative.  The way in which Cooper is lured to NASA and learns about the plan to traverse the worm hole a little too closely recalls Richard Dreyfus’ visions that led him to the Devil’s Tower meet and greet with the spacemen in Close Encounters of the Third Kind.  Also, in its psychedelic journeys through wormholes Interstellar has been obviously influenced by 2001: A Space Odyssey.  Interstellar also features a talking robot on the mission that looks like 2001’s infamous monolith.  Also, through Hans Zimmer’s Strauss-influenced score Interstellar echoes the sound of 2001. Other scenes also allude to Terrence Malick’s meditation on existence and nature, Tree of Life and Andre Tarkovsky’s lengthy Freudian sci-fi film Solaris. Interstellar,  also seems to have been heavily influence by the Jodie Foster film Contact as it explores the notion of love as the most durable force in the universe and one that can transcend space time. Nolan could have done worse than take these fine films as influences but the similarities are too glaring.

A bigger problem, though, is that this film suffers from the Basil Exposition disease of excessive plot-explanation.  Too often characters spell out what’s happening making this film talky and a little dull.  There are some complex scientific ideas at play here but waffling about them at length doesn’t really aid our understanding and certainly doesn’t propel the story.

Even the dream cast fall short of expectations.  Actor of the moment Matthew McConaughey is unusually solemn as Cooper and delivers none of his typical southern-fried swagger.  He’s believable as a hot shot pilot but his prosaic performance hardly suggests someone confronting the end of humanity.  Anne Hathaway almost creates a tragically conflicted character as a mission scientist Amelia Brand but the script doesn’t give her enough room to develop.  Mackenzie Foy seems more petulant than emotionally distraught as the young Murphy while Jessica Chastain barely has time to establish herself as the older Murphy.  Casey Affleck appears later in the piece as the older Tom – who seems to have transformed into a violent redneck – but he’s also a fleeting presence.  Nolan’s muse Michael Caine also has a brief and disappointingly ineffectual role as Hathaway’s scientist father who plans the space mission.

So how does Interstellar stack up as a spectacle?  The space flight CGI is satisfyingly realistic and there are some stunning moments as the circular space station Endurance, which McConaughey pilots, traverses the rings of Saturn and the mouths of black holes.  Unfortunately, the effects look a little pedestrian in comparison to the jaw-dropping clarity and realism of the effects in Alfonso Cuaron’s Gravity, the vivid invention of Kubrik’s 2001 and the gritty realism of Alien.

Admittedly, Interstellar is not just a film about spectacle and space adventure, it’s a film of ideas and if nothing else its impressive for the scope of issues it explores.  From the opening scene with its vast, sweeping cornfields and rustic farm houses evoking the world of a young Clark Kent or Kevin Costner’s Field of Dreams it’s clear that Nolan wishes to capture a distinctly American mythology.  Essential to that mythology is the astronaut as the embodiment of American endeavour.  The film laments the loss of this endeavour in the future as the moon landing has been declared a hoax and NASA has literally been driven underground.  In its grand vision, Interstellar also touches on issues of climate devastation, the degrading of science education and the forces that bond humanity.  Unfortunately, the film takes a dilettante approach to these issues exploring them in a superficial and unsatisfying manner.

Interstellar attempts to cross the boundaries of space-time and delve into the complexities of the human condition but it never conjures the sense of other-worldly wonder that made films that have clearly influenced it so remarkable.