Film review: IT, by Nick Gardener from ‘Built For Speed’ 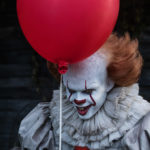 Having previously been adapted for a TV mini-series in 1990, Stephen King’s clown horror novel It now comes to the big screen. While not deserving the praise some have heaped on it, this film manages to continue a recent thread of strong mainstream horror films established by the Conjuring franchise and small-scale spookfests like Lights Out.

In an apparent attempt to connect with cashed-up Gen X-ers, the film’s setting has shifted from the 1950’s to the late 1980’s. In so doing, Director Andy Muschietti and writers Chase Palmer, Cary Fukunaga and Gary Dauberman have fashioned the story into a nostalgic Spielbergian teen rites-of-passage drama that also has more than a hint of another King adaptation, Stand By Me.

The film casts us into the anguished town of Derry, Maine a community beset by a spate of child disappearances. One of the victims is Georgie Denbrough (Jackson Robert Scott) whose fate is revealed early on in one of the film’s better horror sequences. Traumatised by Georgie’s disappearance, his anxious stuttering older brother Bill (Jaeden Lieberher) – who is effectively the film’s central character – becomes obsessed with uncovering his fate. When Bill and his band of bullied 13-year-old nerd buddies begin to have bizarre encounters with the creepy clown Pennywise (Bill Skarsgård), Bill becomes determined to confront the evil force plaguing the town.

It was an enormous novel and compressing it into one feature-length movie would have been very problematic. Wisely, the filmmakers have split the story into two films. This first instalment focuses on the troubled youngsters with much of the film depicting their comradery, rivalry, flowering personalities and myriad teen anxieties brought on by schoolyard bullies, oppressive or even abusive parents and sexual maturation; for the most part Pennywise’s numerous manifestations are designed to exploit these fears. 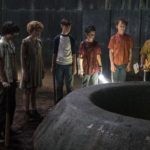 Muschietti invests a lot in the setting, establishing an 80’s teen universe peppered with nostalgic references including (for indie music fans) the very welcome sight of a Replacements poster. The references are mostly subtle and appropriate but Muschietti occasionally goes for the thuddingly obvious as in the scene where the kids point out Beverly’s resemblance to Molly Ringwald.

While the film works as a teen drama and character piece it’s less effective as a horror film. Clowns are inherently pants-wettingly terrifying – just look at old footage of the Bozo the Clown show from the 1960’s and try and sleep that night – but Pennywise isn’t very frightening. The problem lies in the fact that, rather than making him an insidious psychological menace who subtly manipulates children’s fears, the filmmakers too quickly portray him as a CGI-enhanced monster with gaping toothy jaws who launches into frenzied yet oddly ineffective violence. The most unnerving scenes here aren’t the violent ones but those in which Pennywise simply peers out from behind some object.   Also, as in the recent Annabelle: Creation, the youngsters’ reactions to supernatural and at times bloody events are strangely nonchalant; they’ll witness Pennywise suddenly appear in a room and run amuck then they’ll be perfectly calm five seconds later.

Interestingly, Muschietti and cinematographer Chung-hoon Chung have eschewed the grim autumnal look typical of most contemporary horror films, instead filling the screen with sunlit images of small town America. Impressively, they use inventive and disorientating shot composition to create a sense of unease within these superficially warm and reassuring vistas.

It is an erratic film that often feels like Stand By Me meets a Marilyn Manson video. In terms of atmosphere and menace it isn’t in the same universe as The Conjuring films but while it doesn’t completely work as a horror film, as a character drama It is surprisingly effective.