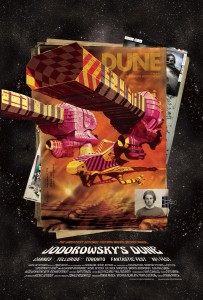 Movie lore is full of tales of vast ambitious film projects that spiralled out of control, sank studios, killed careers or like provocative Chilean-French director Alejandro Jodorowsky’s outrageous 1970’s vision for Frank Herbert’s Dune, never saw the light of day.  The documentary Jodorowsky’s Dune explores what might have been.  Through interviews with Jodorowsky and some of his collaborators from 40 years ago such as fantasy artists Chris Foss and psychosexual art legend H.R. Giger, the film explores the preliminary art work, storyboards and bizarre, hallucinogenic concepts Jodorowsky desperately wanted to bring to the big screen.

The documentary sets the scene with a brief history of Jodorowsky’s career from his early stage work to his highly controversial and divisive 1970’s surrealist films such as El Topo and The Holy Mountain.  When the idea was suggested to him that he should bring Frank Herbert’s sprawling and seemingly un-filmable science fiction epic Dune to the big screen he was at first reluctant having not read the book but he soon became obsessed with the project.

Jodorowsky assembled an astonishing group of concept artists including Mobius, Chris Foss and H.R. Giger to conjure the world of Dune and Dark Star’s Dan O’Bannon to create what would have been ground-breaking special effects.  This group was eccentric enough but it was nothing compared to the cast Jodorowsky had in mind.  His dream cast, which for most directors would have been a nightmare, included Orson Welles, Mick Jagger, David Carradine and believe it or not Salvador Dali.

As he tried to bring his concept of Dune to life, Jodorowsky encountered all sorts of obstacles including a disastrous meeting with 2001: A Space Odyssey’s Douglas Trumbull whom Jodorowsky wanted for the special effects and endless, weird and ridiculous demands from the mischievous Dali.  The pre-production reminded me of Max Bialystok in Mel Brooks’ The Producers trying to ensure that the musical Springtime for Hitler would be a bomb by recruiting outrageous nutters like Roger De Bris to direct and a hippy named LSD to play Hitler.  The film execs to whom Jodorowsky tried to sell Dune understandably saw their studios, houses and country club membership disappearing into a black hole with this film and sent him packing.  The legacy of Jodorowsky’s efforts, however, is a remarkable book containing the entire storyboard layout and design concepts for Dune.

The film unveils this story in enthralling fashion that, while taking its subject seriously, also revels in the outrageousness of Jodorowsky’s bloated ambition.  The doco moves at a decent clip without ever seeming rushed and features interviews that are not only lively and amusing but delve into the kind of nit-picking production detail that film obsessives love. Although Frank Pavich directs this documentary, the wonderfully weird Jodorowsky, now 85, is the ring master as he details his epic, quasi-religious vision for Dune and the abortive project’s unusual backstory.  His infectious child-like enthusiasm and cheeky humour are reason enough to see this film.

One of the most remarkable aspects of this doco is the way it reveals the influence the concepts and artwork for Dune had on subsequent Hollywood films such as Star Wars, Alien, Raiders Of The Lost Ark, Flash Gordon and even Masters Of The Universe.  The doco shows how costumes, designs and storyboarded sequences for Dune seem to have been replicated in some of these films.

It’s no spoiler to say that Jodorowsky’s Dune was never made and that eventually the rights went to David Lynch.  Given what an astonishingly incongruous glitch Lynch’s dull, confusing and clunky-looking Dune represents on his resume, it begs the question of whether it was possible to make a decent film version of the book.  Considering Jodorowsky’s loony casting choices and potentially mammoth costs it seems the studios made a wise decision to avoid this project.  This documentary, the book of stunning designs and story boards and the films they appear to have influenced are probably the best results for which we could hope from Jodorowsky’s wild obsessive vision.