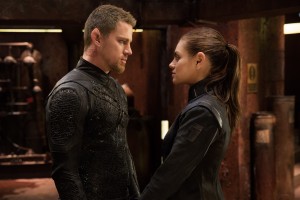 The Wachowski’s appear to have taken scripting lessons from David Lynch’s version of Dune as Jupiter Ascending makes no sense.  Pinching bits of Star Wars, Flash Gordon and the Wachowski’s own Matrix trilogy this maddeningly convoluted film (believe it or not) sees toilet cleaner Jupiter Jones (Mila Kunis) kidnapped by pompous aliens who casually inform her that she is the re-incarnation of their late queen.  With the former queen’s three despicable children Balem (Eddie Redmayne), Titus (Douglas Booth) and Kalique (Tuppence Middleton) battling for control of the queen’s riches and intergalactic property holdings – which apparently include Earth – reluctant queen Jupiter becomes a pawn in an evil power struggle that threatens to end in her death.  Her only hope lies with half-man half-dog super soldier and alien outcast Caine Wise (Channing Tatum) who tracks her across the vast reaches of space.   Surrounding all this is a lot of tedious waffle about harvesting human life for alien industries and some vague commentary about the nature of consumerism that seems suspiciously similar to the scenario in The Matrix.

Admittedly, the storyline is little more than an excuse for action set pieces which are mostly stunning.  The intricately choreographed, hyper-kinetic aerial battles between a flying Tatum and hordes of heavily-armed aliens are often thrilling even if at times they become as busy as a Transformers action sequence.   For once a film benefits from the use of 3D as this film creates an immersive feel and a vast sense of space.

Unfortunately, this inspiration doesn’t extend to the dialogue, characters and performances.  Channing Tatum has earned some serious acting credibility for his role in Foxcatcher but much of that is squandered here.  He grumbles clunky lines while traipsing the galaxy in a ridiculous peroxided goatee, Mr Spock ears and a muscle top.  He also skates through the air on anti-gravity boots that leave a luminous trail like something out Xanadu.

Similarly, Eddies Redmayne, who hams it up atrociously as slimy Prince Balem, threatens to undo much of the good will afforded him for his role as Stephen Hawking in The Theory of Everything.  He looks like the lead singer of Visage and talks in in a ridiculous strangled whisper punctuated by comical bellows that drew derisive cackles from the audience.

Mila Kunis, despite being ostensibly the main character, isn’t left with much to do but look perplexed by all the weirdness going on around her.  Oddly, the Wachowskis have Jupiter’s extended, mostly Russian, family – which includes Aussie Kick Gurry – playing their scenes for broad laughs like something out of a questionable 1970’s British comedy.

This is a crazy, sometimes funny, occasionally spectacular, often embarrassing addition to the Wachowski cannon that will leave most audiences scratching their heads.