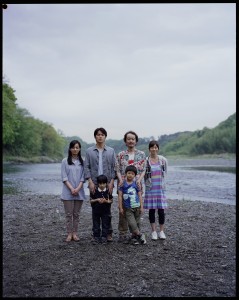 Like last year’s The Other Son, Japanese film Like Father Like Son explores the heartbreaking situation in which two sets of parents discover that that there children were switched at birth and in this case that the son they have raised for six years is not theirs.

While this film is about two families it focuses on Ryota (Masaharu Fukuyama) and Midori (Machiko Ono) and their six year old son Keita. When the hospital in which Midori gave birth informs them that Keita is actually the child of another couple Yukari (Yoko Maki) and Yudai (Riri Furanki) the lives of all four parents are thrown into turmoil.

The film draws clear distinctions between the two families, Ryota is a humourless, workaholic yuppie who is obsessed with personal discipline and success. His wife Midori is gentler, more flexible and more emotionally connected with her son. The other couple, a working class family are much more relaxed, with the father, Yudai, a tradesman who has no problem clowning around with the kids although his wife’s a little more serious and responsible. The film contrasts Ryota and Midori’s sleek angular upscale apartment with Yukari and Yudai’s cluttered, downmarket but welcoming home.

The film conveys a palpable sense of pain as the parents face the near-impossible choice between losing the child with home they have bonded or foregoing a relationship with their flesh and blood. Perhaps because the children who have been switched are younger, more innocent and more vulnerable, this film presents a more agonising dilemma than The Other Son.

Despite the emotionally volatile subject matter, Director Hirokazu Koreeda avoids histrionics or gratuitous displays of emotion to which other directors may have resorted.  Instead he crafts a slow burn tension and sense of evaporating hope.  Koreeda cleverly enhances the film’s mood with subtle use of Bach piano pieces that poignantly echo the two children’s attempts to learn the instrument.

This type of story is familiar territory and there isn’t a lot that Hirokazu could have added to the family drama but few films in this genre have conveyed the pain and awkwardness of this situation as potently as Like Father Like Son.