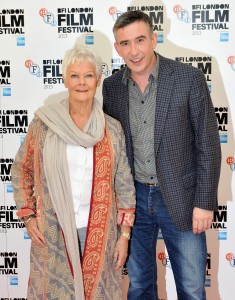 Philomena, starring Dame Judy Dench and Steve Coogan is an unashamed tear-jerker but an extremely affecting one.  The film, based on an article by British journalist and former political spin-doctor Martin Sixsmith, tells of elderly Irish woman, Philomena Lee’s quest to find the son taken from her 50 years earlier.   While a teenager in the early 1960’s, Philomena gave birth to an illegitimate son whom she named Anthony.  Subsequently abandoned by her parents and forced to live in a Catholic Abbey, Philomena naively signed a contract putting her child up for adoption when he was three.  Fifty years later she desperately wants to find out what became of him.  When Sixsmith, who was struggling to establish himself as a journalist at the time, learns of the story, he initially disdains it as a lowly human interest tale but agrees to help Philomena find her lost son if she allows him to write an article about the search.

As Philomena and Sixsmith travel around Ireland and the US pursuing clues about Anthony, the film becomes a moving and at times funny road trip.  The film plays on the cultural differences between the warm-hearted, un-worldly and religious Philomena and the brusque, intellectual atheist Sixsmith. This contrast is, at times, overstated with Sixsmith depicted as an intolerant prat and Philomena as a simpleton but the culture clash is often amusing as in the scene in which Philomena recites the plot of a romance novel to a despondent Sixsmith.

This film could have become a clichéd odd-couple story or a simplistic weepy but clever script-writing from Coogan and Jeff Pope (who won the best screenplay prize at the Venice Film Festival) and terrific performances from Dench and Coogan make it a poignant character study and powerfully emotional story of loss.

Coogan, indulges some of his patented droll humour and occasionally makes us feel as if we are watching his film The Trip but he also shows he can be a subtly effective dramatic actor.  Dame Judy Dench, who is shaping up as a serious Oscar contender, superbly portrays a woman trying to cope with powerful repressed emotions and layers of enforced guilt. She never lapses into histrionics but elicits considerable feeling with just a few words and facial expressions.   Importantly, a film like Philomena shows that older women such as the title character have a complex interior life and shouldn’t be reduced to stereotypes or peripheral supporting characters.

Stephen Frears, best known for High Fidelity and The Queen, directs in an appropriately low-key style that allows Dench and Coogan’s performances to stand out.  While this film is not a travelogue and generally not concerned with spectacle, Frears does suffuse it with a moody autumnal look and provides some stunning vistas of the Irish countryside during Philomena and Martin’s journey.

Some controversy has swirled around this film due to its perceived criticism of the Catholic Church.  The film certainly paints an extremely negative picture of the Abbey to which Philomena was sent, depicting it as a repressive institution that virtually enslaved women and tortured them with guilt about their sexual urges.  This depiction of the Abbey and the practices of the time, particularly forced adoption, are, however, vital to Philomena’s story as they were instrumental in shaping the course of her life.  Ultimately, the film is more concerned with her state of mind and well-being than with broader sociological and theological issues.

Philomena is by no means a perfect film but it is an intelligent, amusing and emotionally confronting story told with great sensitivity.