Sometimes a single stand-out quality can make bad film tolerable and that’s the case with medieval sword and sorcery adventure lark Seventh Son.  The plot makes no sense, the dialogue sounds like it was written by a 13-year-old ‘Dungeons and Dragons’ fan, the non-white characters are disturbingly one-dimensional, the cgi monsters look fake and too it often it feels as if we’re watching a video game rather than a movie.  The film is (just) saved from complete turkey-dom, though, by an outrageously silly yet highly enjoyable, scenery-chomping performance from Jeff Bridges. 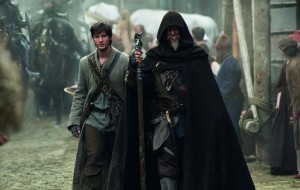 Bridges plays the ageing, dishevelled but seemingly indestructible Knight, Master Gregory who, by virtue of his astonishing ability to kick the ass of anything that walks, flies or breathes fire, earns a tidy living despatching witches, monsters and demons across a strangely Americanised medieval England.  Assisting him are unfortunate apprentices who usually die at the hands of a beastie before they can blink.  His latest squire Tom (Ben Barnes) qualifies for apprenticeship due to his being the seventh son of a seventh son just like Gregory. Not five minutes into his new gig, Tom and his master are thrust into a deadly struggle with the world’s most evil and powerful witch, Mother Malkin (Julianne Moore).

Bridges is above these sorts of films and consequently he has a ball taking the piss with his portrayal of Gregory.  A strange mix of Don Quixote, martial arts master, wise Yoda, slobbering drunk and cantankerous old goat, he’s ridiculous yet noble and contemptible yet oddly likeable.  Mostly, though, he’s a riot.  His topiaried moustache and perpetual goofy grin make his face look like a Guy Fawkes mask and his superbly awful British accent and unintelligible drawl make his every line of dialogue hilarious.

With a loopy performance like that at its core this film should have been a Princess Bride-style comic fantasy romp.  Instead, director Sergei Bodrov – who has previously directed the terrific Prisoner of the Mountains and Mongol – turns the rest of the film into a stock-standard, effects-heavy adventure yarn.  Unfortunately, a meandering story, a complete absence of emotional depth and a slothful pace make it a pretty lame adventure.  The film contains plenty of action and some of it is dynamic and inventive but poor quality effects mean it isn’t particularly convincing or thrilling.

As the titular Seventh Son, Barnes, who previously played Prince Caspian in the Narnia series is an amiable but unremarkable hero.  He’s supposed to be a mediaeval farmer but he looks as if he’s just stepped off a Milan runway.  Alicia Vikander who plays love interest Alice looks like a private school prefect playing medieval dress-ups although she is impressively feisty during some of the action sequences. Julianne Moore follows Eddie Redmayne by leaping straight from an Oscar winning performance into outrageously camp villain role.  While her strutting femme fatale witch is occasionally like something out of a British pantomime, she’s not quite as embarrassingly silly as Redmayne in Jupiter Ascending.

Seventh Son will no doubt make a few critics’ turkey lists but with Bridges hamming it up superbly throughout, it’s a guilty pleasure.