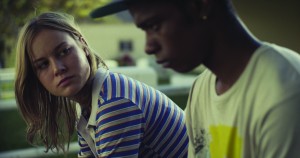 Only a viewer with ice in their veins could fail to be moved by low-budget US indie drama Short Term 12.  Based on writer/ director Destin Cretton’s 2008 short film, Short Term 12 is set in a foster care facility for troubled and abused teenagers and focuses on social worker Grace (United States of Tara’s Brie Larsen) who supervises the kids while trying to cope with the emotional scars of her traumatic past.  The film explores the painful mix of highs and lows in her profession as she experiences euphoric breakthroughs with angry and confused teens as well as dispiriting and even tragic set-backs.

Short Term 12 (the title refers to the name of the foster care home) is refreshingly understated but has a powerful emotional undertow that pulls the audience into the characters’ disturbing world and forces them to care about these teens and to consider the stresses experienced by people in the helping professions.

Made on a shoe string, the film rests on the smart, believable script and wonderful naturalistic performances from Brie Larson and John Gallagher Jr as her boyfriend and co-worker, Mason.   At first, Larson and Gallagher look a little too much like stereotypical young, attractive indie hipsters but they quickly convince in their roles and look as if they have spent years as carers.

The young supporting cast who play the foster children are also excellent, particularly Keith Stanfield as brooding, taciturn Marcus who is almost 18 and facing prison if he can’t control his anger and Jayden (Kaitlyn Dever) a sullen teen goth girl whose disturbing experiences resonate powerfully with Grace.  Some of the characters, such as awkward new social worker Nate (Rami Malek) and the withdrawn youngster Sammy (Alex Calloway) are, however, too thinly sketched and needed more screen time and more back story to expand their characters.

Writer/ director Destin Cretton convincingly depicts the daily trials of a work environment and weaves into this world a series of emotionally involving personal dramas.  He establishes characters, situations, rhythm and language that feel genuine and even when he occasionally threatens to go over the top, as in Grace’s reaction to an abusive father, he quickly re-establishes the film’s raw and realistic tone.

With its austere production values and confronting subject matter Short Term 12 probably won’t lure the substantial audience it deserves but passionate cinemagoers should not miss this gem.