Film review: THE AVENGERS: AGE OF ULTRON, from ‘Built For Speed’ 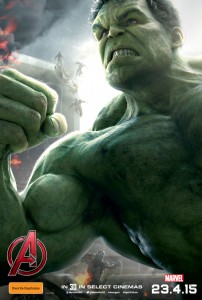 Avengers: Age of Ultron is the 11th Marvel comics cinema adaptation and the series is feeling a little tired.  The first Iron Man and Avengers films cleverly balanced dynamic action with cheeky humour and an inventive vision of futuristic technology but the many Marvel superhero films that have followed, including Age of Ultron, have, unfortunately, become tiresome and infuriatingly cluttered videogame destruction fests.

In an extremely convoluted, confusing and generally uninteresting plot, the Avengers: Thor (Chris Hemsworth), Captain America (Chris Evans), Iron Man/ Tony Stark (Robert Downey Jr), Hulk/ Dr Bruce Banner (Mark Ruffalo), Natasha Romanova aka Black Widow (Scarlett Johansson) and Hawkeye (Jeremy Renner) battle the evil robot Ultron (voiced in typically droll fashion by James Spader) which is unwittingly unleashed by Stark in a typical moment of hubris and misguided altruism. Ultron, has apparently been watching a few too many Bond villains and Terminator movies as he is intent on wiping humans off the face of the earth.  He’s assisted by two eastern European siblings Wanda aka Scarlett Witch (Elizabeth Olsen) and Pietro aka Quicksilver (Aaron Taylor-Johnson ) who have a serious beef with Stark and who have dangerous X-men-like super powers including the ability to mess with the Avengers’ minds.  The story doesnt makes much sense and writer/director Joss Whedon’s attempts at exposition just lead to slow patches that will infuriate the all-important audience of 14-year-old males who want to see superheroes smashing stuff.

Unfortunately, once the destruction begins so does the tedium for adult audiences as this film, like The Hobbit, transforms into a succession of mind-numbing battle sequences in which the Avengers use cgi-enhanced acrobatic fighting moves to effortlessly dispatch armies of amazingly piss-weak robot villains.  As with all the recent superhero films there are also copious scenes of super heroes ploughing through buildings and generally smashing to pieces the city their trying to save.  Admittedly, the scale of some of these action scenes is impressive with an entire city being lifted into the sky at one point but with the action scenes almost entirely bloodless and devoid of tension or threat it all feels impotent. Ominously, an Avengers instalment entitled Infinity Wars is on the horizon.

The biggest problem with Avengers: Age of Ultron is that it is so hideously cluttered.  With the screen constantly filled with gadgets, robots and elaborate and incomprehensible computer graphics, this film lurches dangerously close to being as indigestible and headache-inducing as a Transformers movie.  Stark’s relentless techno-babble dialogue doesn’t help either.

Slotted between the destruction and the tech worship are attempts to humanise the characters and expose the frailties lurking beneath their superhuman exteriors.  Unfortunately, this aspect of the film doesn’t work because the story is so stuffed with characters that it ends up darting annoyingly from one superhero to another giving us tantalising but unsatisfying titbits of information about their origins and mind set.  A lengthy sequence in which the Avengers drop in on Hawkeye’s family and experience domestic life is simply dull and an attempt to forge a relationship between Scarlett Johansson’s Black Widow and Mark Ruffalo’s Bruce Banner has little emotional impact. Also, this film suffers from the absence of the series’ most interesting character, the sneaky destructive Norse god Loki (Tom Hiddleston).

The relentless pummelling action in Avengers: Age of Ultron will no doubt satisfy the faithful but it won’t convert those not already enamoured of the Marvel universe and will poison much of the good will felt by passing fans who liked the character focus of the first Avengers film.