Film review: THE IN-BETWEENERS 2, from Built For Speed 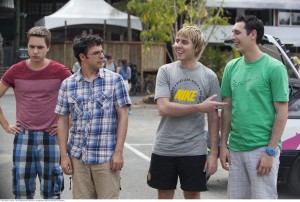 British comedy The In-Betweeners was one of the funniest shows on TV.  Like a more obscene, low-budget British reworking of American Pie , The In-Betweeners perfectly captured the idiocy of horny deluded teenagers and the never-ending nightmare for a vaguely intelligent teen forced to co-habit with them.  The TV show featured Simon Bird as studious, neurotic teenager Will who reluctantly befriended the astonishingly stupid Neil (Blake Harrison), the easily-led Simon (Joe Thomas) and the gleefully obnoxious Jay (James Buckley).  Because of their knucklehead behaviour Will experienced every humiliation that could be inflicted on self-conscious youth.  Every decent school boy nerd was forced to endure friends like these, numbskulls who talked incessantly about their bodily functions, believed every idiotic urban myth they heard, always dropped you in a pile of crap and who lived under the insane delusion that they were attractive to girls.  Told from Will’s perspective, the TV show cleverly balanced wit with obscenity, pushing the boundaries of comedy without ever becoming crass.

The show’s success led to a middling spin-off movie that was a box office hit in Britain. That film, however, saw much of the show’s clever observational wit replaced with cheap sight gags. The sequel The In-betweeners 2 unfortunately continues that downward trajectory.

This film adopts a device that traditionally spells disaster for TV shows, the trip to Australia. After they receive an outrageous text from Jay describing the apparently sex-filled, rock star lifestyle he claims to be leading on his gap year in Australia the other lads Will, Simon and Neil decide to join him.  Reality is of course infinitely uglier than the Jay’s fantasy world.  Rejected by women, forced to endure obnoxious rich kid eco-tourists and at one point becoming perilously lost in the Australian desert, the guys’ would-be sex tour turns into a nightmare.

There are a couple of decent laughs scattered throughout this film but too often it settles for obvious low-brow gags involving genitalia and excrement.  Some of these will be impressively outrageous to younger audience members but older audiences will (hopefully) yawn.  The TV show put the obscenity in context as an embodiment of the disgusting and moronic world Will had to endure but here it’s just gratuitous.

Each of the four leads plays his part with the same mix of enthusiasm and wide-eyed stupidity they did in the TV show but they can’t enliven a second rate script.  Will still manages a couple of impressively neurotic outbursts, though, particularly when he launches a tirade against a repulsive pretentious dreadlocked wanker.  Bert Field also chips in with an amusingly menacing performance as Jay’s Aussie bogan uncle who looks like he could have come from Wake In Fright.

The In-Betweeners 2 is by no means a disaster and will become a guilty pleasure for some but it’s a disappointment given the expectations raised by the TV show.