Mama Blue & Son is an unusual musical group. Olive May is 76 and her son Steve Romig decided it was time to do a proper recording of her.
Their new album is now available and is getting airplay on the major independent blues charts across Australia and they are taking the festival scene by storm. Olive has been singing for giggles in various wine bars around the Mornington Peninsula for years and is greatly admired by fellow entertainers and patrons alike. Steve, in spite of being actively discouraged by his step father, went on to become a musician. He started learning guitar at the age of 15 and began writing songs around the same time because he thought “if the Beatles can do it so can I”. John Farnham has recorded 2 of his songs so, fortunately, he was right. He has also produced/co-produced 6 different albums including 3 of his own, one for Jim Keays ( Resonator) and one for Twyce Daily ( Simple Things) and now, one for his Mum, Olive May( Mama Blue & Son…Outa Cash Outa Luck & Outa Booze). He plays a variety of string instruments including Bass, Guitar, Mandolin, Lap Steele and Banjo.

Tune in on Sunday from 4pm to this wonderful duo for a unique combination of music and inevitably, a tale or two to be told. 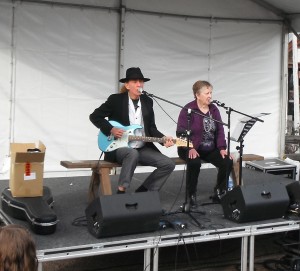