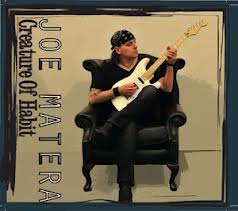 This Sunday on The Live Sunday Sessions our very special guest is renowned guitarist Joe Matera. Joe is just  unleashing his new album ‘Creature Of Habit’ on the world. As a 20 + year veteran of countless original and covers outfits, Joe’s impressive CV includes Australian rock outfit GEISHA (2007 – 2010) and rock band DOUBLE VISION (2003 – 2008). One of his original guitar instrumental compositions, ‘Starry Night’ also appears on the soundtrack to the Australian movie Ricky!- The Movie (Nov. 2011). He also served as lead guitarist in the orchestra for the award winning stage productions of Les Misérables and Chess. The Australian native has built up a fine body of work to date and this album may well be his best yet with 11 instrumental compositions along with ‘Fallen Angel‘ which is a perfect showcase for Joe’s vocal ability, alongside his instrumental/guitar work.

This Sunday from 4pm Joe will be playing a few live tracks in the studio as well as giving us a sampler from the new album and talking music in general.