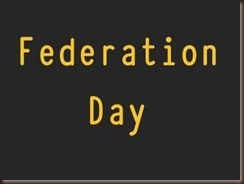 Listen again to Songs of Hope segment on Federation Day in Australia, new years day, 1 January. On 1 January 1901, Australia was proclaimed a federation of states, called the Commonwealth of Australia. On this day Australia’s constitution came into operation, and the first Governor-General (Lord Hopetoun) and Prime Minister (Edmund Barton) were sworn into office at a special ceremony in Centennial Park in Sydney. Thousands attended. Broadcast on Southern FM 88.3 on 4/1/2015

Also we have a recording was of our first Songs of Hope program for the year 2015. Since the Christian Christmas festival traditionally goes for 12 days from Christmas Day, our program included three carols early in the program.

tagged with Songs of Hope