Film review: GUARDIANS OF THE GALAXY, VOL.2, by Nick Gardener from ‘Built For Speed’ 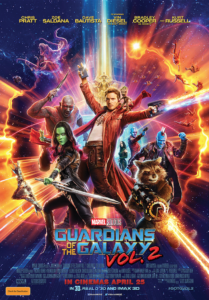 The first Guardians of the Galaxy film caused a minor sensation as it broke from the Marvel formula for a wildly different superhero experience. That film unusually but successfully combined elaborate often spectacular special effects, thrilling action sequences, vivid art direction, piss-taking humour and Gen X pop-cultural references including classic 1970’s power pop hits. With the sequel, writer/ director James Gunn had the ominous task of capturing the original’s magic while building on the mythology. Unfortunately, despite an often impressive visual and aural onslaught, there’s a disturbing sense of repetition about this film. Gunn has essentially taken the original and pumped it full of even more cinematic steroids but failed to deliver a really compelling story.

The awkwardly constructed plot sees hero Peter Quill (Chris Pratt) and his crew Gamora (Zoe Saldana), shirtless muscle man alien Drax (Dave Bautista), trouble-making raccoon Rocket (once again voiced by Bradley Cooper) and Baby Groot (voiced by Vin Diesel) fleeing a vengeful galactic Queen (Elizabeth Debicki) and her golden hued minions after Rocket steals some priceless batteries. Amid the chaos of a Galaxian-style space battle they encounter a strange bearded figure unsubtly named Ego (Kurt Russell) who it turns out has a connection to one of the crew. Ego also has an unusual link to the planet he occupies – and on which Peter and crew seek refuge – a link that vaguely recalls sci-fi classics such as Solaris and Forbidden Planet. It soon becomes apparent that the folksy Ego’s intentions are not as benign as they originally seemed and an almighty confrontation will ensue.

With inventive effects sequences and art direction that, more than other Marvel films, replicates the look of a comic this candy-coloured phantasmagoria is at first a visual feast. By the midpoint of the film, though, it’s so saturated with CGI and outlandish action scenes that it loses almost all visceral human connection and the thrills and emotion evaporate. It briefly recovers during a moving sequence involving a major character but by the end of the film – including its multiple post-credit sequences – space battle fatigue has taken hold.

To his credit, Gunn attempts to make this more than just a jokey spectacle by exploring themes of family including Freudian father issues and intense sibling rivalry. Unfortunately he doesn’t integrate these themes into the space opera in a particularly insightful way.

The original was most clearly distinguished from the Marvel pack by two aspects, the first being its ballsy sardonic humour. The humour still works at times but also occasionally feels forced and predictable; we know that nearly every emotional scene will be undercut by a smug adolescent quip. Also, some gags – including one about a bad guy’s nickname – that are lame to begin with are milked endlessly.

The other feature that distinguished the first film from the Marvel production line was its use of music and here the sequel still hits the mark superbly. Gunn cleverly uses each well-chosen hit to inject scenes with exuberant energy, a superb example being an early sequence where the Guardians battle a tentacled beast to the strains of ELO’s Mr Blue Sky.

Importantly, this franchise still emphasises character even if some aren’t as compelling as they should be. As Quill or Starlord, Chris Pratt has been touted as a roguish hero worthy of Han Solo which is befuddling as he has almost none of Harrison Ford’s charisma or cheeky wit. As Drax Dave Bautista’s gormlessness and weird illogical take on reality are still kind of endearing and at times funny but his habit of roaring with laughter at inappropriate moments has become annoying and tedious. Much more impressive is Zoey Saldana as the noble yet flinty Gamora. Her battle with cyborg sister Nebula (Karen Gillan) isn’t quite as moving as it could have been but she still commands every scene in which she appears and is the film’s real hero.

Tellingly, the cgi critter Rocket occupies much of the screen time which speaks to the filmmakers’ obsession with special effects and smart-alec humour. Impressively, though, Bradley Cooper once again gives this computer creation dimension and personality. The taciturn Groot was a particulary memorable character from the first film and his offspring Baby Groot ads some cuteness as well as some pathos to this film. Elizabeth Debicki also amuses with a scenery-chomping performance as the golden queen Ayeesha. The retro themed art deco world she inhabits with her gold-painted followers has some of the camp appeal of Flash Gordon. As in the first film, Michael Rooker delivers a potent performance as space pirate and Peter’s surrogate father, Yondu.

For those wanting more retina-burning effects, skull-pounding space battles, self-referential humour and simply more time with well-loved characters, this sequel will probably suffice but for those wanting some evolution in the franchise this will seem like a very competent but slightly unsatisfying re-tread.