Film review: THE HOBBIT: THE DESOLATION OF SMAUG, from Built For Speed 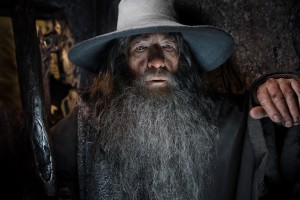 The first Hobbit film, An Unexpected Journey was a loud, ugly overlong mess full of ridiculous dwarf sing-a-longs, tedious computer-generated battle sequences and interminable scenes of dwarves traipsing through the forest.  It also featured characters suspiciously shoehorned into the story from other sources such as The Lord of the Rings.  Lacking subtlety, emotional depth and the simple, pastoral charm of the book, the first Hobbit film could at best be seen as an unfocused outpouring of director Peter Jackson’s obsessive completest nature, at worst a cynical attempt to cash in on The Lord of the Rings films’ vast following.

For the first half hour of the sequel The Desolation of Smaug, the franchise seems to be taking a different and much more interesting direction. A series of genuinely exciting action sequences involving a confrontation with mutating bear-man Bjorn and an unnerving battle with giant spiders provide a thrilling start to the film.  Desolation also features an imposing first meeting with the sinister ghostly figure of The Dark Lord, Sauron.  It was also an enormous relief that the version shown to the media had not been filmed in the grotesque 48 frames per second format which made the first film look like an early 80’s music video on fast forward.

While Desolation is a huge improvement on An Unexpected Journey, it still has considerable problems.  Being the middle section of a trilogy it has neither the thrill of first exposure to the Hobbit world nor a rousing conclusion.  Plot-wise, it’s simply a linking segment as Bilbo (Martin Freeman) and the dwarf party continue their long journey to recover the dwarves’ sacred Arkan stone from the now defunct dwarf Kingdom of Erebor and confront the stone’s guardian, the enormous dragon Smaug.  Jackson tries to spice up the story with a succession of action sequences but there’s still plenty of plodding across Kiwi landscapes.

The film is also drenched in CGI and looks so much like a computer game that the sense of fantasy and wonder is often lost.  Computer animation may have evolved phenomenally since the first Rings movie but characters still seem to float in mid-air as they walk and some move with the jerky motion of a Jar Jar Binks.

One of the biggest problems with the first Hobbit film and to some extent the Rings movies, was the ridiculous physics-defying nature of many action sequences. That’s still an issue here as pudgy dwarves and hobbits outrun collapsing building and crumbling bridges, leap onto convenient dangling chains then perform Nadia Comaneci twirls through the air before landing without a scratch on their hairy feet.

Worst of all Peter Jackson seems to have the Spielberg/George Lucas affection for silly sight gags.   When he puts dwarves on screen he just can’t help but turn them into cringe-worthy comical figures.  The dwarves feature in some ludicrous scenes that punch an enormous hole in the film’s credibility including one sequence in which a dwarf rolling along a riverbank in a barrel skittles an army of orcs like nine-pins.

The film also commits one of Dr Nick’s cinematic cardinal sins namely “piss-weak monster”.  The orcs who pursue Bilbo and the dwarves are astonishingly inept in combat and are so easily dispatched that they pose almost no threat.  Their master, The Dark Lord, really needs to have a word to his HR people. 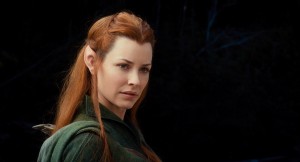 A source of consternation for Hobbit purists was the inclusion of characters who weren’t in the book.   Orlando Bloom’s Legolas, for example, was never in The Hobbit novel but appears in the film, not just for a cameo but as a pivotal character who has nearly as much screen time as Bilbo.  Particularly toxic internet nerd invective has been directed, though, at a new character who was never part of the Tolkien universe, the elf-woman Tauriel (Evangeline Lilly).   She’s an accomplished warrior and a romantic interest for Legolas although at this stage, she isn’t exactly vital to the narrative.   Despite this, her inclusion is a successful move on Jackson’s part as Lilly has a great screen presence, looks very fetching in the pointy ears and features in a love triangle with Legolas and young dwarf Kili (Aidan Turner) that, for once, adds some emotional depth to Jackson’s Hobbit/ Rings world.

One of the criticisms of the first film was that Martin Freeman’s Bilbo went missing for great chunks of the movie.  This is again the case in the second instalment but Freeman still does a fine job as Bilbo as he begins to show the malevolent effect the ring is having on his personality.  Richard Armitage is once again stoic and angry as dwarf hard man Thorin Oakenshield and while he still talks in the generic pompous British accent, he’s a convincing warrior King.  The actor of the moment, Benedict Cumberbatch, voices Smaug but Jackson really could have used anyone as Cumberbatch’s voice is subjected to so many distorting effects he sounds like the lead singer of a death metal band.  Sir Ian reprises his role of Gandalf but keeps buggering off to hang out with his mysterious mate Radogast just as the dwarves are about to be attacked.

By the third hour The Desolation of Smaug, begins to sag under the weight of Jackson’s bloated ambition but there are enough fine moments to make this a worthwhile and encouraging addition to the Hobbit franchise.