Film review: THE HOBBIT: THE BATTLE OF THE FIVE ARMIES, from Built For Speed

The Hobbit: The Battle of the Five Armies is the final instalment in the ludicrously inflated Hobbit trilogy, a series that has vividly exposed many of director Peter Jackson’s filmmaking flaws particularly his long-winded story-telling and poor character development.  The first Hobbit film, An Unexpected Journey was noisy, silly, featured too many embarrassing attempts at comedy and even had a hideous Dwarf sing-along.  The second film, The Desolation of Smaug improved matters considerably with a tighter, more exciting storyline and some of the best sequences in the series including a tense battle with humungous spiders.  The third film, while better than the first movie, represents a slight backward step in quality from Desolation.

The third film has the predetermined responsibility of tying up the series’ various story strands which it does adequately but not before some dull plot diversions and very long, uninspired battle sequences. The film begins excitingly, though, with the dragon Smaug making good his threat from the second film to obliterate the ramshackle city of Laketown.  He brings fiery death from the sky forcing the inhabitants to flee to the foot of the Lonely Mountain.  Inside the mountain the Dwarf company, led by Thorin, have established a stronghold to protect the vast riches within and to begin their goal of resurrecting the Dwarf kingdom.  With Laketown’s people seeking refuge in the mountain and the Elves wanting their slice of the riches, a military stand-off between the Dwarves and the Elves ensues.  Soon, however, the opponents face a mutual enemy in the form of Sauron’s Orc armies.

This film and the series suffer two fundamental problems.  First, the Dwarves who occupy so much screen time are not lovable or memorable characters; I doubt that anyone who hasn’t read the book obsessively could name more than three of them.  Their most enduring characteristic is that most of them look bloody silly. The second and most damaging problem is that Bilbo Baggins (Martin Freeman) barely gets a look in.  He should be the central figure in the story and his experiences should shape the film’s tone and psychology but he simply pops in for visit every now and then.  Because of Bilbo’s frequent absences the audience don’t have a chance form a sufficiently strong emotional connection with him so his personal drama has little impact.  This is a writing problem and the very likeable Martin Freeman does his best with this limited role. 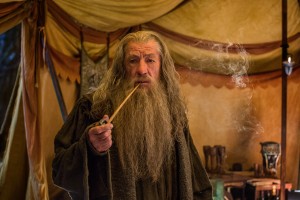 Bilbo’s screen time is sacrificed because Jackson spreads the action across too many characters.  There’s sub-plots involving Gandalf (Sir Ian McKellan), Legolas (Orlando Bloom), Thorin Oakenshield (Richard Armitage), Bard the Bowman (Luke Evans) and Elf leader Thranduil (Lee Pace) who looks like a member of a Swedish metal band from the 1980’s and rides around Middle Earth on a giant moose.  The film also dedicates an unusually large amount of time to a cross-dressing comedy relief character Alfed (Ryan Gage) who has no impact on the narrative. Many of these story threads never appeared in the original novel and few of them add greatly to the story.  Much of the film focuses on Thorin but, because of his grumpy demeanour, he hasn’t become the memorable character his Rings analogue Aragorn was and isn’t someone we particularly care about.  The sub-plot which occupies much of this film’s first half, in which Thorin succumbs to dragon sickness (try and score a day off work with that) and turns into a miserable, paranoid megalomaniac, is tedious.  Fortunately, though, the film builds on the relationship between the Dwarf Kili (Aiden Turner) and Elf woman Tauriel (Evangeline Lilly) which began in the second film and is the only situation in which Jackson’s Middle Earth movies achieve any emotional depth.

A lot of the film’s second half is taken up with the eponymous battle and although some of the scenes of vast armies sweeping across the landscape are impressive, much of the warfare is realised through surprisingly unconvincing cgi.  Characters seem to float in mid-air and move in slow motion and many of the backgrounds look like something out of a video game or a cartoon.  Part of the appeal of a fantasy film is in seeing a non-existent world come to life but the look of this film constantly reminds us that we are watching something constructed on a computer.

Another huge problem with the battle scenes in this film is the scourge known (to Built For Speed listeners) as ‘piss-weak monster’.  The evil Orcs, despite being enormous, armour-clad beasts allegedly bread for war are so astonishingly inept in battle they represent no threat; they’re about as effective a fighting force as Captain Mannering’s troupe in Dad’s Army.  The Dwarves, who are one third their size, simply swat them away without the slightest effort.  Even, supposed softy Bilbo, who is like a toddler in comparison to the Orcs, trounces them with ease; at one point he despatches five of them by throwing a few a small rocks.

This is a passable end to an erratic franchise that, across three long films, has only been saved by a few memorable moments.