Film review: THE WATER DIVINER, from Built For Speed 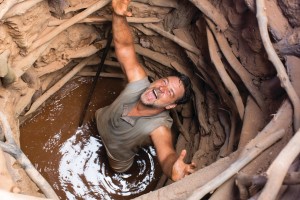 Australian cinema audiences embrace films that explore the Australian identity.  This is evident in the success of films such as Picnic at Hanging Rock which examined Australian culture as the 20th century dawned and the nation began to define itself from mother England, The Castle, which affectionately satirised the Australian suburban identity and Peter Weir’s Gallipoli, which both celebrated and critiqued the birth of the Aussie digger mythology. The latest Australian cinematic hit, The Water Diviner, which marks Russell Crowe’s debut as a director, again invokes Gallipoli and the digger mythology but does so from an unusual perspective.

Crowe plays Joshua Connor (yes a JC) the eponymous water diviner who uses divining rods to discover subterranean reservoirs in the harsh country of Northern Victoria.  His divining obsession acts as a metaphor for his search for what has been lost in his life.  His relationship with wife (Jacqueline McKenzie) has been torn apart after their three teenage sons disappeared, presumed dead while fighting in the hell of Gallipoli four years earlier.  When further tragedy strikes, Crowe heads to British-occupied Turkey hoping to recover his sons’ remains.  There he meets unexpected obstacles in the form of an intransigent British military bureaucracy and growing political unrest in a volatile region.  He also uncovers remarkable truths about his sons’ fate.

This should have been a deeply moving tale of a man on a tragic quest but it fails to grip the viewer. Part of the problem is a fragmented narrative that shifts awkwardly from war film, to family drama, to period piece, to romance to mystery story.  The film also split’s its focus between Connor, Major Hasan (Y?lmaz Erdo?an) who lead the Turkish forces in the battle in which Crowe’s sons were involved, the Australian Lt Colonel Hughes (Jai Courtenay) who has been charged with identifying lost soldiers in Gallipoli and Connor’s love interest in Turkey, Ayshe (Olga Kurylenko).  This shifting focus deprives the plot of clarity and momentum.

The film also suffers from some ridiculous shark jumping moments including one scene in which Mr Crowe trounces a group of heavily-armed soldiers with a cricket bat.  Yes, Russell Crowe at Gallipoli with a cricket bat, it doesn’t get any more Aussie than that. The film also indulges some embarrassing stereotypes with the British officers all upper-class twits including the bureaucratic captain played by Aussie Dan Wylie who wants to stifle Connor’s attempts to find his son.

From a visual standpoint, though, Crowe’s directorial debut is mostly impressive.  Along with cinematographer Andrew Lesnie (whose career highlights include the Lord of the Rings films and Simon Townshend’s Wonder World) Crowe fashions some stunning compositions with superb vistas of the northern Victorian landscape, the hellish battle-scarred Gallipoli hillsides as well as intoxicating shots of the Turkish capital bathed in twilight.  Surprisingly though, the battles scenes that recall the three boys’ fates are not particularly impressive or convincing and look like something out of The Sullivans.  Also, unconvincing is the unlikely romance between the stunning, exotic, young Ayshe (Kurylenko) and the rotund, hairy 50-year-old Aussie farmer (Crowe).

To its credit, however, the film is not a complete Aussie flag-waver and though Major Hasan, often looks at Gallipoli from the Turkish perspective, the Turks having list 7000 soldiers there.

The Water Diviner is a heavily flawed film but impressive in enough areas to make it a minor success for Russell Crowe as a debutant director.