Whilst unfortunately The Red House Jesters have had to postpone their Live Sunday Session until later in the year, more than adequate compensation has been granted as Alex Watts has stepped up to the plate and will perform solo in the studio this Sunday 26th June from 4pm. 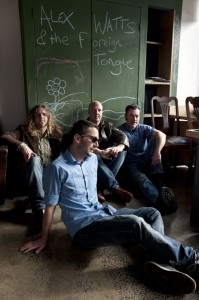 Alex Watts & the Foreign Tongue play warm full bodied rock and roll with aromatic hints of tobacco and balsawood.  Often jangly, nervous and jagged in parts, they’ve got swagger and the charisma to back it up.  Having played around Melbourne in various bands for many years, in 2010 Watts decided to step out and put his own stamp on the singer/songwriter mould, forming a new group to perform with, featuring Brian Juffs (bass), Andy Phillips (guitar), and Michael McHugh (drums).  Together they have created a sound that draws from both the melodic yet impassioned world of folk music and the violent realm of rock and roll, channeling in equal parts Hank Williams, Neil Finn and Joe Strummer. Desperate Love, the band’s debut EP, is available now through Astound Records.