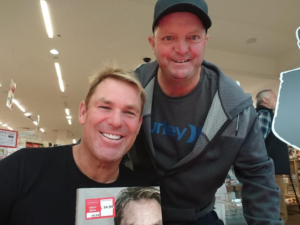 Mentone Grammar schoolmates Wayne Fuller and Shane Warne played in a premiership cricket team in 1986-87. With the cricket world in shock over Warnie’s death, Wayne spoke with Southern FM newsman Colin Tyrus about his memories of the King of Spin. That’s Wayne in the back row (right) of the Mentone Grammar cricket team photo with captain Shane front and centre, next to coach Barry Irons.

Wayne Fuller is part of the SECA Cricket Panel on Southern FM – Sundays at 10:30 AM.