– some of Derryn’s favourite songs

– some of the books he has authored

After the interview finishes (at 2 hours 18 minutes), Mark has added some more of Derryn’s favourite songs to round the podcast off to exactly 3 hours 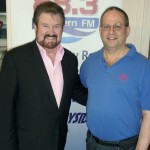 Derryn and Mark at 88.3 Southern FM

Derryn Hinch is an Australian media personality, best known for his work on Melbourne radio. He was the host of 3AW‘s drive time radio show until December 2012 and he is currently National Public Affairs commentator for the Seven Network. He has also been a police reporter, foreign correspondent, newspaper editor, television show host, actor (usually playing as himself) novelist and vintner.

Hinch completed his contract with 3AW in December 2012. Hinch hosted Beauty and the Beast on the Seven Network between 1982 and 1983.From 1987 to 1991, Hinch hosted his own current affairs show on the Seven Network titled Hinch, which later moved to Network Ten where it ran from 1992–1994. In 1994, Hinch joined the Nine Network and hosted The Midday Show for approximately a year. He has also appeared on Dancing with the Stars, Underbelly and Millionaire Hot Seat as a guest playing for charity.

On radio, Hinch has hosted 3AW‘s Drivetime radio show since 2003 & he has also formerly hosted a morning program at the station. In September 2012, Hinch re-joined the Seven Network as National Public affairs commentator, though there were rumours Hinch might make a comeback.

Mark’s next guest will be American singer Melanie Safka who had man international hits including : Lay Down, What Have They Done To My Song Ma, Brand New Key, etc. That will be late October, early November