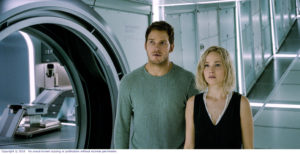 We can almost hear the boardroom meeting: “that Titanic made a bundle and so did that Gravity let’s mash them together, throw in a couple of Hollywood’s hottest stars and it’s new Ferraris all round”. The result is Passengers a sci-fi/ adventure/ romance that should have been a moving and thrilling space adventure but winds up being surprisingly tepid.

Chris Pratt stars as Jim Preston a mechanic who, at a time in the future, has, along with 5,000 other intrepid souls, volunteered to be placed in suspended animation and transported across the galaxies in the spaceship Avalon so he can be among the first people to populate a new planet named Homestead 2. When a mishap causes his sleep pod to malfunction and wake him from suspended animation 30 years into the 120 year journey, Jim finds himself floating through space alone. At first the intergalactic cruise ship’s numerous high tech attractions stave off the misery of Jim’s solitude but he soon begins to crave human contact. When he is joined by another passenger Aurora (Jennifer Lawrence) and starts to form a romantic relationship with her, Jim’s lonely fate seems to have been averted but he also confronted with a painful moral dilemma.

With the film predominantly focused on the two main characters, the pairing of Jennifer Lawrence and Chris Pratt needed to produce phenomenal screen chemistry. Unfortunately, their romance isn’t especially moving or even believable. Most of the time they’re just two ridiculously good looking people larking about in space. Added to that, the sci-fi drama in which their lives are threatened is mostly predictable and pinches ideas from superior films such as 2001: A Space Odyssey.

Still, it’s hard not enjoy any Jennifer Lawrence performance. Even if the script doesn’t realise her character’s potential, Lawrence still imbues Aurora with strength and emotional depth. Pratt on the other hand seems more suited to quirky action hero roles like the ones he played in Guardians of the Galaxy and Jurassic World and he doesn’t convince as a man undergoing an existential crises or as a romantic lead. The only other actor with substantial screen time is Michael Sheen who is appropriately creepy as the suspiciously polite android bar tender Arthur.

Imitation Game director Morten Tyldum fashions a slick, shiny and somewhat soulless world aboard the Avalon, a ship whose interior resembles a futuristic games parlour mixed with a shopping mall after closing time. He conjures a few visually impressive sci-fi action set pieces but this film lacks the indelible art direction of sci-fi classics like Alien.

The potential was here for a sci-fi epic and a touching human story but Passengers winds up as a mediocre space romance.